The Great Fueling Experiment of 2020

With races on hold, now is a great time to experiment with fueling.  Here are a few strategies for you to try:

Twenty five years ago, I wrote an article on no fuel (aka low glycogen) training. Dieticians sent me nasty notes stating that athletes should always be fueled for training. But I knew that this was not the case.

Today, science has backed up the idea of no fuel/low fuel training, which I had already learned from studying with the world’s best coaches and athletes.

Does this mean fueling on runs is bad? Of course not! But there are some really great benefits from no fuel training, like increased glycogen storage and mental toughness.  It takes a few no fuel runs but soon, your body adapts, and you can better leverage the fuel you already have inside your body – a big positive for training and racing performance.

WARNING: Don’t just jump into two hours with no fuel if you’ve been fueling on all your long runs. Use common sense and simply reduce your fueling over a few runs till you aren’t taking in any carbohydrates on your long runs.  Will you feel worse on your runs? Yes. But that’s part of the training process. Carry an “emergency” gel or other carbohydrate source in case you really need it and avoid no fuel training if you have blood sugar issues like diabetes.  See the additional Resources at the end of the article for details on how to use this strategy.

Where was UCAN when I was a young marathoner?!  UCAN is a slow-release carbohydrate that avoids the spike and crash of blood sugar, something I am particularly susceptible to with traditional sports drinks and gels.

If you use a traditional sports drink/gel method in your long runs and long races, give the slow fuel strategy a try. See how it performs on your stomach and how you feel across the run.

At least for UCAN, a good protocol is 2 servings 45-60 minutes before your run then a serving every hour across the run. In between servings, you hydrate with water and electrolytes. With some experimentation, you can use more or less UCAN each feeding and/or take it more and less frequently.  Try to find the least complicated feeding schedule that helps you avoid a drop in energy.

For marathoners, this is becoming the go-to strategy. You use slow fueling for the bulk of the race (to avoid the spike/crash and GI distress) then add in the quick boost of energy in the last 25-30% of the race.

Try this strategy in some of your long runs. Use slow fueling (as described above) for 50-75% of the run then for the final part of the run, use fast-acting carbohydrates like in sports drinks and gels. See how you feel.  For many runners, this is the best of both worlds. You get steady energy and a happy gut for the bulk of the race but a surge in energy for the fatiguing brain late in the race. This jolt of energy can help you push hard, even when the body is fatiguing.

The thing I really like about this strategy is that is simplifies the fueling. You only need to fuel once per hour with slow-acting carbohydrates (with fluids/electrolytes every 15 minutes in between) so your brain and GI system stays happy. Then, you give your fatiguing brain a boost of energy, leveraging what we’ve learned from neuroscience about central fatigue and the central governor theory, so you can power yourself to the finish line.  The simpler your fueling strategy, the more can focus on the race instead of worrying about fueling.

Remember a few years ago when the Chicago Marathon was blazing hot and many runners had big problems? The next year, Gatorade introduced their Gatorade Endurance formula which added more electrolytes to their usual formula.

Ultra runners and Ironman triathletes have been doing this for years so take a cue from them and try adding more fluid and electrolytes to some of your long runs. Find your tolerance for fluid intake and electrolyte intake.

The gut is trainable so if you do some runs where you’re trying to maximize fluid intake and electrolyte intake, you’ll easily find what works best for your body and your gut will become more tolerant of more fluids.

Note: Runners are starting to make their own bespoke sports drinks so you can simply add electrolyte supplements to your water to find your optimal concoction.

Again, this is a time to experiment. Find your limits. Try things and remember that you are going for failure on some of these strategies. The failures (fatigue, GI distress) are your greatest teachers.

More and more, runners are carrying some component of their fueling in races. From small flasks with concentrated carbohydrates to hydration vests with refillable bladders, there are great options for whichever strategy you find works best for you and now is the time to experiment with your hydration gear.  I bet your training friends have as many hydration bottles, carriers, belts and vests as you do. How ‘bout doing a swap and experiment with something different?

Once you find what works for you, you’ll be all set for race day when it comes again.

Fitting it All In

I provided a lot of different strategies but don’t get overwhelmed. Just pick one or two that are different than you are currently using or seem interesting and give them a try.  Since a “failed” long run isn’t’ as big a deal with no races on the calendar, this is the exact best time to do some experimentation.  “Learn by doing” is what my running hero Rod Dixon always says. It’s all about experimentation and exploration. Let’s leverage this opportunity to determine the best fueling strategy for upcoming training and eventually races.

As always, let me know if I can be of any help. 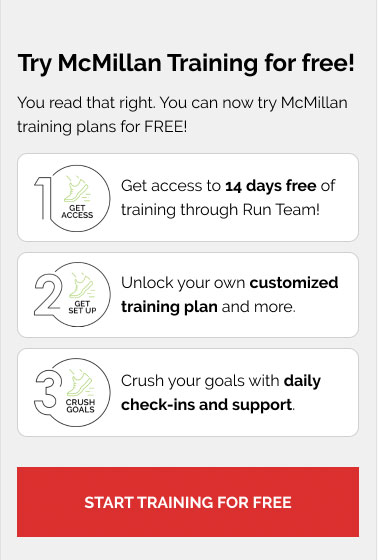