This is the second article in the Run Like McMillan series, a series of profiles on McMillan athletes.

Stein Henrik Olaussen had never been athletic – or so he thought.

A self-described musician, he spent much of his high school years playing in rock bands.

“I had never been good at sports growing up and was not a sports guy,” said Olaussen.

Around nine years ago, his then-girlfriend completed a half marathon. Curious, Olaussen decided to try one too.

“Up to that point, I’d done some jogging for exercise and strength training, but no long distance,” said Olaussen. “[I] started using the treadmill to see how far I could go and how it felt. There were only three standard settings – walk, jog and run, but I thought I should be able to use the run feature to go as far as I could so I kind of built up on that.”

“I got the impression that 1:35 was kind of a good time from people, so I began to sign up for other half marathons and got under 1:30 in the summer of 2012,” said Olaussen. “I thought perhaps maybe I had some running talent.”

He ran his first marathon later that year and ran a 3:19. A year later, he won his first race – the 2013 Maratonkarusellen- a local marathon in Bergen, Norway, where he resides with his family.

“We had a massive snowfall the night before and we were running in 10 centimeters of fresh snow and most people dropped out,” said Olaussen. “But I kept going.”

Olaussen heard a story about a friend of a friend who ran 13 marathons to coincide with the year 2013. “I wanted to one-up him and decided to do 14 marathons in 2014,” he said.

He ran all over Europe – Paris, Stockholm, Brussels and other local Norwegian marathons. He set his original PR of 2:45:59 at the Brussels Marathon in Belgium. Following his original success, he struggled to get back to the 2:45 mark. 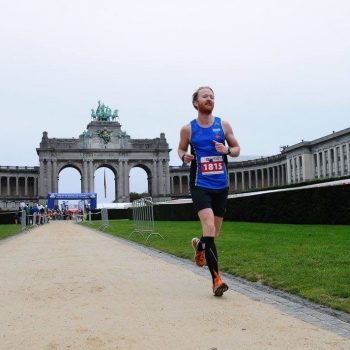 In July, he began to use McMillan to train for the Berlin Marathon and hoped to see a difference. He’d heard about McMillan training through a friend who had recommended it.

The appeal of the variety of workouts within the program stood out to Olaussen, and the recognition that he needed work on some long-distance speed so he became interested in the results of his workouts.

“It was a whole new way to run,” said Olaussen. “The fartlek runs made me faster, and the progression/fast finish runs gave me confidence like nothing else.”

Olaussen noted he had been doing a lot of marathons, probably too many, and felt he wasn’t reaching his potential. But when he started following the training program, he began to see his times come down in shorter distance races, and even set new PRs in the 3K and 5K.

“My approach to marathon racing used to be to go all in for the first half and see what I could manage after that,” said Olaussen. “But the fast finish long runs sort of challenged that approach.”

He set his sites on his next marathon – Berlin – reveling in the new training he was experiencing. He had completed 50 marathons before he turned 35, and Berlin would be his 51st.

“Five weeks out from the race, there was a progressive long run on the schedule so I decided to do it on my commute (I’ll commute run to/from work sometimes and it’s a 15K or so),” said Olaussen. “I incorporated a tempo session on that commute and I had a pace 10 seconds per kilometer faster, but still had the same heart rate – so I could really just see things were improving.”

“I was feeling great, and when I toed the line at Berlin in September, I knew it would be a good race,” said Olaussen.

The gun went off.

“I kicked it up a notch, thinking I was probably going to blow up in the second half so I should at least get a half marathon PR,” said Olaussen. “I passed the HM mark at 1:16:56, a PR by exactly 30 seconds.”

Still worried about blowing up, Olaussen tried to stay on “cruise control” for the rest of the race, hoping to stave off the inevitable wall.

But the wall – and blowing up – never came.

“I had to get under the minute (2:39) so I managed a sprint finish to hit the 2:38:59,” said Olaussen. “I think it was the fartlek workouts providing that extra kick which I haven’t had before perhaps, so that was really good.”

Olaussen describes his emotions in Berlin as “happy, surprised and shocked.” 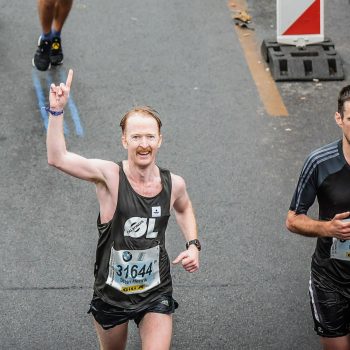 “I felt better than I had ever done finishing a race, and I screamed and yelled and smiled like crazy,” said Olaussen. “After running so many races, I thought I knew what my body was capable of, but now it felt like somebody had changed the rules in my favor- I was king of the world!”

The PR was made all the more sweet because he made the journey with four of his running friends from one of his local running groups called “Øl & Kondis” – which translated to English literally means “Beer & Endurance.” All four of his friends also PR’d, and two of them also used the McMillan marathon training program.

Olaussen’s next goals include improving his 10K time, which currently stands at 35:41. “I wanted to do a sub-35 before I turned 35, but we’ll see,” said Olaussen. Being competitive is one of the things he loves about running.

“People are always talking about how it’s their moment to relax and one with nature and I enjoy a lot of that as well and it’s a fantastic way to clear my head sometimes through running. Every problem I might have seems much smaller after a run and everything seems much lighter,” said Olaussen. “But I have to be honest and say the competitive portion and the sense of accomplishment is the biggest thing for me.”

Olaussen jokes he should just tattoo the Berlin time on his body, give up running and start doing something else instead. He never wanted to be a jock, doesn’t want to take it too seriously and wants only the motivation of new PRs to keep him in the game.

But there’s still an allure to running and competition he can’t deny, and he says he might just not quit running after all.

Previous Post
The Red Zone: Tracking Your Period
Next Post
Top 5 Exercises for Marathoners: Bodyweight Moves to Master Before Your Next Big Race

The Great Fueling Experiment of 2020
Marathon Training Guide
Chicago Marathon Preview
Race Canceled! How to adjust your training
Top 5 Tips for Qualifying for the Boston Marathon
The Comeback Runner