GREG’S RULES FOR SUBSTITUTING WORKOUTS IN YOUR TRAINING PLAN

There will be times throughout your training year where you may want to substitute a workout for what is planned on your schedule.  Let’s say your local running group is doing a set of mile repeats but you have a Tempo Run scheduled. You may wonder if this is okay or not. Here is my guide to deciding:

For example, let’s say you have a Steady State Run scheduled but your training buddy wants to do a set of Cruise Intervals.  If we look at the McMillan training zones as shown in the McMillan Calculator Training Paces (see pic below), you’ll see that a Steady State Run and Cruise Intervals are in the same zone – the Stamina Zone. Therefore, you don’t even have to think about it. You can just switch workouts and know you are still getting the stamina challenge that your schedule calls for.

Is the challenge exactly the same? No. But, in the grand scheme of things, this type of occasional “within zone” substitution is perfectly fine. 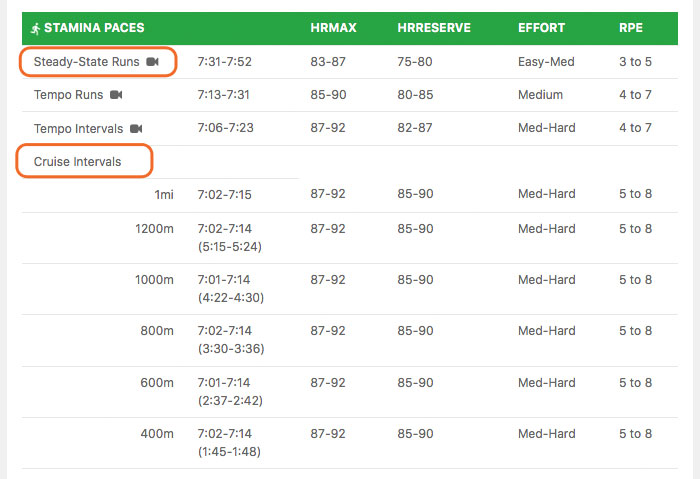 If the planned workout is from an adjacent training zone to the alternative workout, then that’s a yellow light. Not a big problem but we just need to think about your goals for that training period and make sure you are still getting the adaptations you need.

A common scenario was mentioned at the opening. Let’s say your local running group is doing Speed Work (a set of 1600m/mile repeats) but you have a Tempo Run scheduled. The speed workout is in the Speed Zone (see pic below) whereas the Tempo Run is in the Stamina Zone. These zones are adjacent zones and often your plan will have workouts from adjacent zones frequently throughout your training cycle.  So, you just look ahead in your plan and see if you can easily just swap the workouts from an upcoming week.

You just switch the workouts because you see that the next week or two you have, in our example, a Speed Workout planned so you just run it now and move the Tempo Run to the week with the speed workout.  So, in these “adjacent zone” swaps, you just look ahead and plan to swap workouts so you can run with your local group.

Sometimes, it’s a bit harder. Let’s say you are training for a half-marathon and you feel you have good speed but lack stamina. In this case, you probably shouldn’t switch the workouts because you need the stamina work and not the speed work. On the other hand, if you were struggling with stamina and really just wanted a workout to make you feel good (mentally more than anything) then switch the workouts. It’s worth the sacrifice if you are getting mentally tired and need a “slam dunk” workout.

So, there can be exceptions to this rule but for the most part, swapping adjacent zone workouts is acceptable. 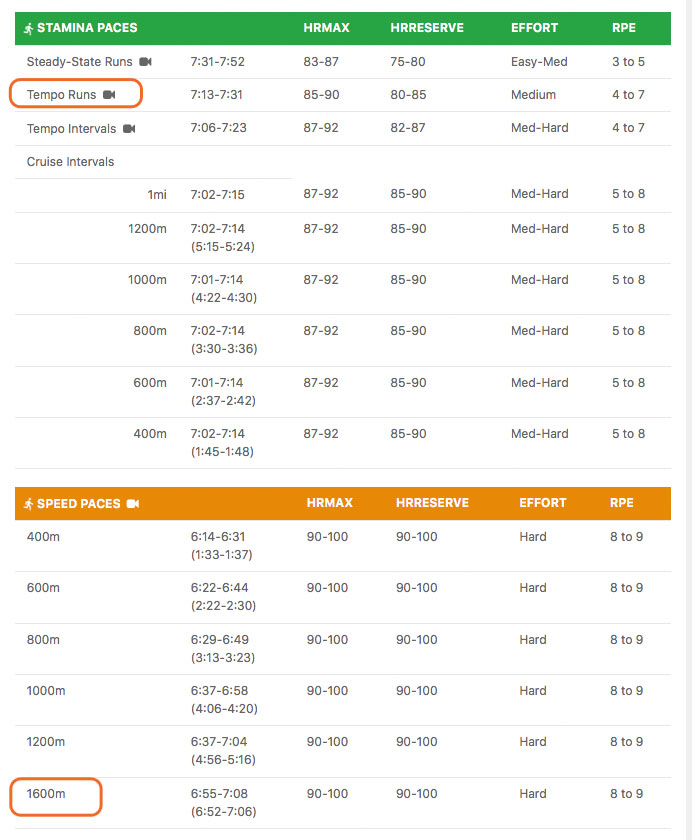 Now, if the planned workout is in a zone that is far from the alternative workout then that’s a red light. We need to stop and really think about our goals.

For example, let’s say you are getting ready for a marathon and have a Steady State Run scheduled (Stamina Zone) but your buddy wants to go to the track and do fast 400m repeats (Sprint Zone) – see pic below. That might be fun but does it fit with your goals? What’s the risk/reward? 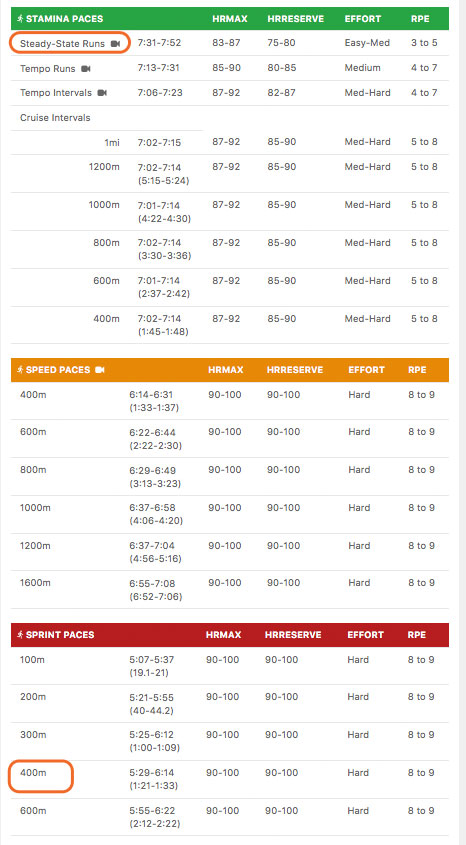 It might still be a good idea to do it if you are a speedster, really want to break up the marathon training with a fast workout and/or have missed training with your buddy.

But, it probably wouldn’t be a good idea if you are an endurance monster who will fair poorly in the workout and it will likely cause your subsequent training to suffer, particularly any marathon-specific training. Again, think about what you are trying to work on and how the alternative workout will help or hurt you – mentally as well as physically.

Does all this make sense? It really just comes down to evaluating the two workouts (planned & alternative) and making a thoughtful decision. Again, every situation will be different so there is no firm right or wrong but I think a little thought is all that is required.

If you want to know more about our 4 Training Zones (Endurance, Stamina, Speed and Sprint), check out this article (and the “next page” at the bottom of it where all the workouts are categorized).